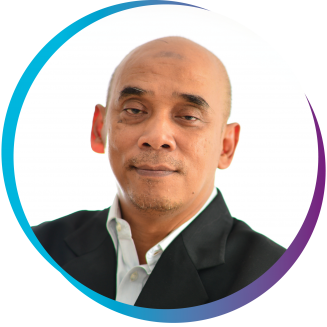 Began his career in Banking Industry in 1987 with Bank Eksport Import Indonesia, he then moved to start a new career in finance and investment through the Capital Markets in 1990 and joined PT International Pacific Financial Corporation a Joint Venture Company of BRI, Sanwa Bank Japan and Credit Commerce De France (CCF) one of the leading Non Bank Financial Institutions in France.

In 1995 he joined PT Para Multifinance a company own by Para Group, now known as Trans Corp, as General Manager responsible for Marketing and Operation until 2001. In 2002 he became a Co Founder and Owner of PT Summit Nusantar Capital a Securities Company as well as in PT. Indo Cipta a Business Consulting Firm.

In 2013 he moved to Denpasar Bali to joined the Denpasar Junction Mall as Financial Controller until he joined the RFI in June 2013 as Project Finance Manager and Controller for CBD Ciledug Family Mall, were he has overseen a complete rebuild of the Finance and Accounting department implementing essential financial controls and systemic efficiency measures.